Cassius Clay – I Am The Greatest

“This is the legend of Cassius Clay,
The most beautiful fighter in the world today.
He talks a great deal, and brags indeed-y,
of a muscular punch that’s incredibly speed-y.
The fistic world was dull and weary,
But with a champ like Liston, things had to be dreary.
Then someone with color and someone with dash,
Brought fight fans are runnin’ with Cash.
This brash young boxer is something to see
And the heavyweight championship is his des-tin-y.
This kid fights great; he’s got speed and endurance,
But if you sign to fight him, increase your insurance.
This kid’s got a left; this kid’s got a right,
If he hit you once, you’re asleep for the night.
And as you lie on the floor while the ref counts ten,
You’ll pray that you won’t have to fight me again.
For I am the man this poem’s about,
The next champ of the world, there isn’t a doubt.
This I predict and I know the score,
I’ll be champ of the world in ’64.
When I say three, they’ll go in the third,
10 months ago 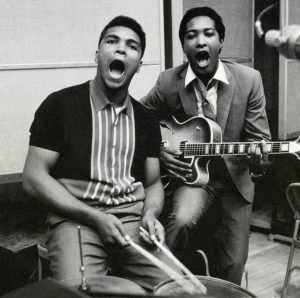 So don’t bet against me, I’m a man of my word.
He is the greatest! Yes!
I am the man this poem’s about,
I’ll be champ of the world, there isn’t a doubt.
Here I predict Mr. Liston’s dismemberment,
I’ll hit him so hard; he’ll wonder where October and November went.
When I say two, there’s never a third,
Standin against me is completely absurd.
When Cassius says a mouse can outrun a horse,
Don’t ask how; put your money where your mouse is!
I AM THE GREATEST!”

Taken from the album – I Am The Greatest!