There is a widespread view that people who work for record labels don’t care about music. But actually, people here at Legacy are obsessed with music! So we’re starting Sony Spotlight – an inside look at the people working within our label plus details about their stories, souvenirs and more!

Our first Sony Spotlight is on John Cattini who has worked in the sales team for over 25 years.


SO JOHN, WHAT WAS YOUR FIRST RECORD?

“My first record was Sound Affects by The Jam, which was released in November of 1980. It was a Christmas present from my big sister Pat.

The story on how I got it signed is quite an interesting one. 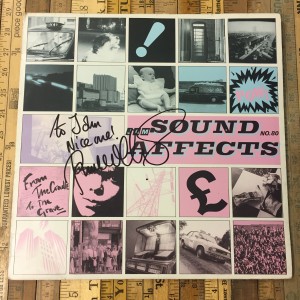 I was fortunate to attend the Mojo Awards a few years ago, and thought I’d take the record along with me in the hope of getting it signed by Paul Weller. Though it is a fantastic record, it is also of huge sentimental value.

There were many heroes of mine at the awards, including the likes of Nick Cave and The Fall, but I managed to find Paul and he kindly signed it for me. I was absolutely ecstatic and couldn’t wait to get it home. In the event, that wasn’t how things worked out.

Unfortunately, between the aftershow and arriving home in the early hours I managed to misplace the record somehow. I was horrified! The following day I frantically contacted all of my colleagues who had been there to see if anyone had picked it up it, but to no avail. Two of the guys here who knew how much this meant to me generously offered to try to get some form of replacement signed by the great man instead (“All Mod Cons” maybe?) and others chased up the venue and the taxi company.

In the end, I contacted the venue myself and explained the gravity of the situation to the manageress. She made it a personal mission to track down and locate it, questioning everyone who was working that night. More than a week later I got a call. They had found it! I was so relieved. It has never left my sight since and now hangs proudly in my music room at home.”

“My favourite Sony Artist is Bob Dylan. For me he’s by far the greatest songwriter of all time – I cannot believe just how many mind-blowing songs he has composed and continues to write.

When I was 16 my friend Michelle let me borrow the Greatest Hits on vinyl, and I was hooked. Within a year I was working at my first job and I got tickets to see him at the NEC in Birmingham on the Temples In Flame Tour, with Tom Petty and the Heartbreakers as his back-up band and support group. Since then I’ve seen him over 20 times.

All these years after hearing that first record it is amazing and something of a privilege to be involved in Dylan projects through my work.”

Favourite Album: ‘Blood on the Tracks’ – Listen to it here:

Favourite Track: “Most of the Time” from ‘Oh Mercy’ – Listen to it here:

THE BEST GIG YOU’VE EVER BEEN TO?

“I’ve seen The Smiths a number of times and each was a near religious experience.

My favourite show of theirs was at Salford University in 1986 on The Queen Is Dead tour. Amongst the stage invasion melee I even got to shake hands with the great Moz – I was young and knew no better.

Johnny Marr has since said it was their best ever show. That’s good enough for me.” 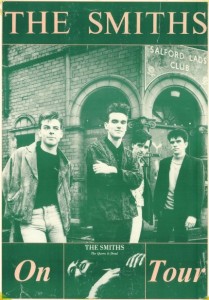