There is a widespread view that people who work for record labels don’t care about music. But actually, people here at Legacy are obsessed with music! So here is Sony Spotlight – an inside look at the people working within our label plus details about their stories, souvenirs and more!

WHAT WAS THE FIRST RECORD YOU EVER BOUGHT?

A copy of No Doubt – Tragic Kingdom on tape from a petrol station in East Belfast with my Dad because I liked the cover but it actually turned out to be a pretty good choice! John Frusciante used to say that the best way to buy new records was to pick the covers you liked so I guess it worked out for me.

There are so many but it would have to be The Clash. As a teenager growing up in Belfast, it was a wildly exciting time to finally discover a band like The Clash (via a long running teenage obsession with The Libertines) after scouring their artwork and seeing the name Mick Jones on the production credits. That led me to a copy of London Calling which I never tire of – you can’t beat the kicks in those drums in the opener! Lost In The Supermarket is my favourite Clash song, and one of my favourite songs ever.

WHAT’S THE BEST GIG YOU’VE BEEN TO?

I’ve been to a lot of gigs so that’s a really tough one but the first time I ever saw The Stone Roses was in Heaton Park in Manchester and that was as overwhelming and atmospheric as you would expect. An unrelenting crowd of mancs shouting “I am the resurrection and I am the life” is pretty hard to beat on a summers day with your mates.

Honourable mentions go to Laurent Garnier DJing for six hours in Liverpool to a packed sweaty room and Gallows playing a really small venue in Belfast with Frank Carter hanging upside down from the rafters.

I also have to add, seeing Caribou in the Kazimer in Liverpool (which has unfortunately closed recently) about eight years ago was unreal. I had an exam the next day so almost didn’t go, what a mistake that would have been.

Disclosure played a 150 capacity show in Liverpool that I was working at before they even had a deal and the whole room was going crazy all night long. Moodymann played the same venue for a 5 hour set which I’ll remember forever.

Again, a really hard choice but I absolutely rinsed it from the day it came out and still do now –  good kid, m.A.A.d city by Kendrick Lamar. All my favourite rappers tell a great story and Kendrick’s one of the best. Illmatic by Nas would be my other choice – could listen to it every single day and often still do.

WHO ARE YOUR FAVOURITE ARTISTS?

They say never meet your heroes but I was lucky enough to meet Nas, who was lovely and as cool as I always hoped he would be. 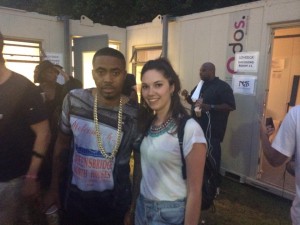