Artist of the Month: Bruce Springsteen

As we revisit one of The Boss’ most urgent, powerful eras, our artist of the month for May is the one and only Bruce Springsteen.

When hitting a peak at speed, the temptation is to push further and higher. After all, what was all that business about kissing the sky? Or flying to the moon? Do we want our stars to shine brightly in the heavens or are we really asking them to keep both feet on the ground? So many questions yet so few answers.

But Bruce Springsteen knew. Again. But then again, Bruce Springsteen is no ordinary star. Following the planet-straddling success of Born In The USA in 1984 – by far his most successful yet misunderstood album – the Boss could have so easily followed in the same trajectory, the same strike out for further fame and glory.

But – by Springsteen’s own admission – he’d had enough of the big time. Eschewing a big band or big producers, Springsteen instead looked inwards. Recorded in three weeks or so, 1987’s ‘Tunnel Of Love’ is an album that finds him moving away from bigger social concerns to the personal nature of men and women in love. Which wasn’t too surprising given his own domestic circumstance. These were adult themes tackled in the best way that he knew. And for Bruce, this was as much new territory on the record as it was off.

The five-year gap that followed saw Springsteen split from his first wife, actress Julianne Phillips, break up the E Street Band, marry singer/songwriter Patti Scialfa and move to the west coast as he retreated from public life. In March 1992, he simultaneously released two albums, ‘Human Touch’ and ‘Lucky Town’, which found him working with a whole host of new musicians and singers including Stax legend Sam Moore, the Righteous Brothers’ Bobby Hatfield and The Small Faces’ Ian McLagen among others.

Pausing to record ‘In Concert/MTV Unplugged’ in 1993, Bruce Springsteen returned to what he does best two years later. Returning once again to the themes and techniques of ‘Nebraska’, ‘The Ghost Of Tom Joad’ is one the strongest albums in Springsteen’s cannon.

A State Of The Union address set to music, Springsteen finds that the social and economic divides that greeted his first solo acoustic album have only grown worse. Explicitly political, Springsteen also put his weight behind the illegal aliens who come to America to contribute but are left exploited, crushed and ignored, and the working class who toil for scant reward.

Little wonder then, that ‘The Ghost Of Tom Joad’ won the 1997 Grammy for Best Contemporary Folk Album.

Along with the ‘Chimes Of Freedom’ and ‘Blood Brothers’ EPs, these five albums – long out of print – are remastered on vinyl with some expanded to double LPs for greater sound definition, on ‘The Album Collection Vol 2, 1987-1996’, released on May 18. 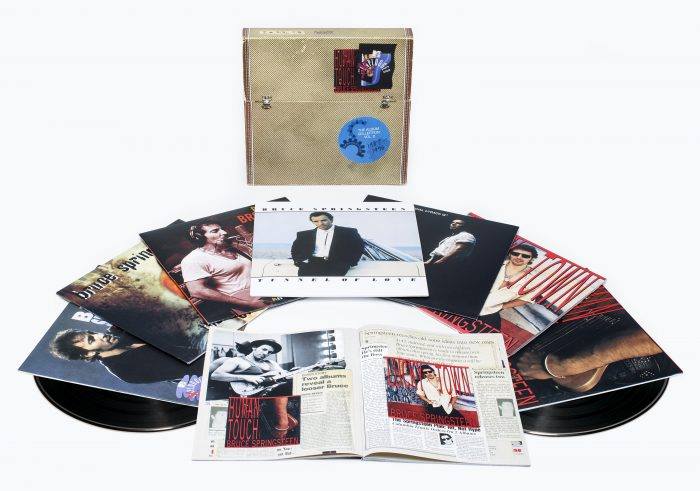 The package totals ten discs, each presented in faithful recreations of the original packaging, and comes accompanied by a 60-page book featuring rarely seen photos, memorabilia and original press clippings from the period.

One of the most fertile, era-defining periods of one of our most powerful artists.