Artist of the Month: Leonard Cohen

As one of the most compelling, fascinating and enduring figures of the modern musical era, Leonard Cohen remains, even after his passing, one of those rare cultural figures whose work and mystique not only transcend the decades, but also succeeds in growing his audience with the passing of time.

It’s little surprise, then, to frequently find his name mentioned in the same breath as other trailblazing originals such as Bob Dylan and Lou Reed for, like them, Leonard Cohen is rightly recognised as one of the greatest lyricists of all time.

If Leonard Cohen taught us anything, then surely one of the greatest has to be that it’s never too late to do anything. Though he first broke through as singer-songwriter in 1967 with the instant classic that is ‘Songs Of Leonard Cohen’, it’s worth bearing in mind that he’d already established himself as an author and poet of some considerable note.

Indeed, by the time his musical career started, Leonard Cohen had already had two novels published in the shape of ‘The Favourite Game’ (1963) and ‘Beautiful Losers’ (1966) as well as a number of poetry collections including the acclaimed ‘Flowers For Hitler’. With this is mind, the fact that he was born before Elvis Presley takes on a greater significance; here is an artist whose work flourished after rock’n’roll’s Big Bang.

William Faulkner once wrote that “a writer needs three things: experience, observation and imagination, any two of which can supply the lack of the others.” Leonard Cohen was blessed with all three at all times. Along with work that tackled the seemingly taboo subjects of sex, politics and religion as well as affairs of the heart and how we connect with each other, the rich timbre of Leonard Cohen’s voice was instantly as recognisable.

It was believable for here was experience, observation and imagination all rolled into one. Consequently, it’s not difficult to read so much into his simple assessment on ‘Tower Of Song’ that “I was born with the gift of a golden voice.”

And the mark of Leonard Cohen’s talent is that so many artists feel compelled to cover it. Be it Nick Cave opting to open his debut solo album, ‘From Her To Eternity’, with ‘Avalanche’ from Cohen’s third album, ‘Songs Of Love And Hate’ or Jeff Buckley claiming ‘Hallelujah’ as his own, and all points in between, Leonard Cohen has been a constant source of inspiration.

Though he was forced out of retirement, Leonard Cohen’s desire to produce quality work never once waned and there he was teaching us that valuable lesson that it’s never too late.

And even now he refuses to allow death to have the final word as he returns with the posthumous ‘Thanks For The Dance’. Assembled from musical “sketches” drawn at the time of ‘You Want It Darker’, here his son Adam, along with contributors, collaborators and disciples such as Beck, Jennifer Warnes and Leslie Feist, bring these drafts vividly to life. 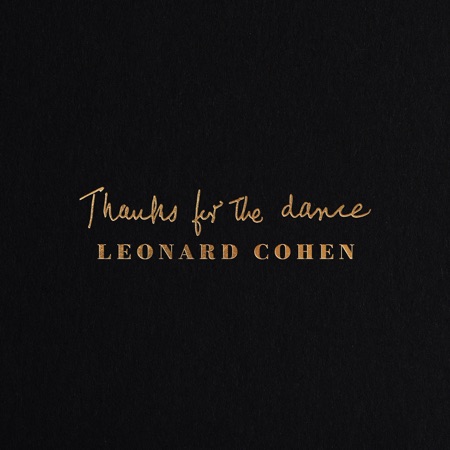 PRE-ORDER ‘THANKS FOR THE DANCE’