Dylan scholars and enthusiasts have long rumored that Bob Dylan had a secret archive… It has now been revealed that a private collection of his work has been kept throughout Dylan’s 55 year career. The collection of work dates back to his earliest days as an artist, including lyrics, correspondence, recordings, films and photographs. 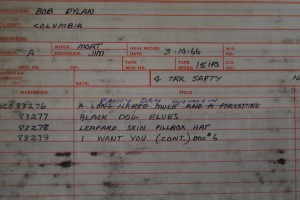 According to the New York Times the archive comprises of over 6,000 pieces and has recently been acquired by a the George Kaiser Family Foundation and Tulsa University in Oklahoma for an estimated $15 million to $20 million. The archive will serve as a resource for academic study.

The majority of the archived material will be kept at the Helmerich Center for American Research, a facility at the Gilcrease Museum, which is affiliated with Tulsa University.  Although plans are still being made, the Kaiser Family Foundation are considering a spot next to the Woody Guthrie Museum for a new Dylan gallery that will be open to the public.

Woody Guthrie was a folk singer and one of Dylan’s early influences. “I’m glad that my archives, which have been collected all these years, have finally found a home and are to be included with the works of Woody Guthrie… To me, it makes a lot of sense and it’s a great honor,” Dylan said in a statement.