Here at Legacy we absolutely love all of the Woolly Rockers, so it’s only right that we spoke to the woman behind the wool! 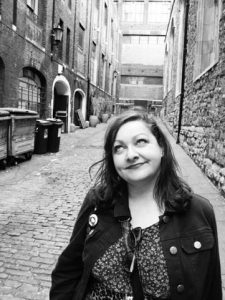 Liz Powner, the creator of Woolly Rockers has been knitting, sewing since the day she can remember, and we wanted to find out more about what inspired her to create her collection…

WHAT INSPIRED YOU TO DO WOOLLY ROCKERS?
I started a long time ago! When I was a kid I found a pattern in one of my grandmas Woman’s Weekly magazines for nursery rhyme characters. I made Little Miss Muffet and Little Boy Blue.

Years later, when I was at home one summer between university terms, I made the Little Boy Blue with a longer jacket and fashioned them into the Sergent Pepper Beatles in red, yellow, blue and pink. I kept these with me and a friend saw them and asked me to make some more, so I did. 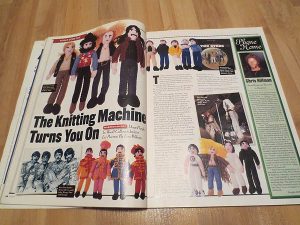 Then word got around. I made a set for a photographer, Terry Rawlings, and left them for him to pick up in my friends vintage clothes shop, What the Butler Wore, in Waterloo.

Bridget, who runs the shop, showed them to her friend, Lois Wilson, who was a writer for Mojo magazine, and she wrote a feature on them. I’ve had a lot of orders from then onwards.

WHICH WAS THE HARDEST BOB DYLAN DOLL TO MAKE?
The hardest of the Dylans was probably Nashville Skyline. I had the idea initially as a photography project: to make every single Dylan album cover by posing the Bobs and reproducing the LP cover photo. Nashville Skyline was hard for a couple of reasons. 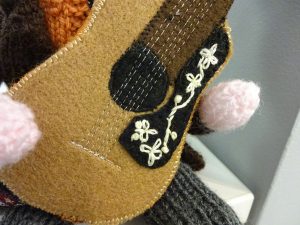 Firstly the guitar, a Gibson J200 with the flower detail. I was able to reproduce this with embroidery which was quite satisfying. Also, because he doesn’t really have a beard but is a bit stubbly I tried using really fine wool for the stubble – but I still think he looks a bit too beardy! 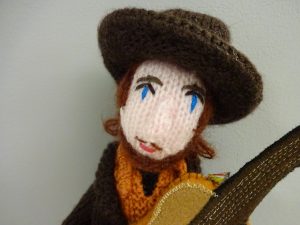 Because all the facial features are embroidered there are knots at the back of the head, it would be impossible to do someone who was completely bald – the knots would show!

WHICH WOOLLY ROCKER ARE YOU MOST PROUD OF?
Frida Kahlo. I made a few artists for a collaboration with an artist friend. Frida is so distinctive looking with her monobrow and Mexican dress. I really enjoyed making her. She has a lot of colourful embroidery and flowers. 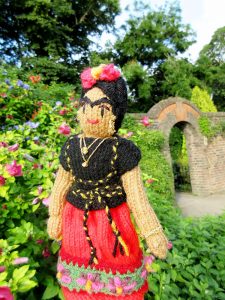 WHICH ROCKER ARE YOU THINKING OF CREATING NEXT?
At the moment I’m working on Jimi Hendrix, the Monterey Pop festival outfit. I’ve made him before but I’ve improved the design of the Rockers so they have a wire frame, this is wrapped with strips of wire for the bodies before the knitted body is sewn on.

This means they can stand up by themselves and it’s possible to put them in different poses, like playing guitar! 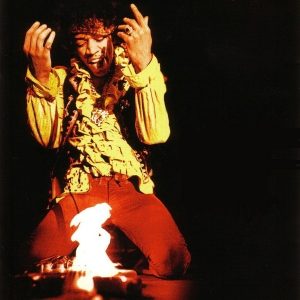 I want to make a new improved Jimi, as well as  Willie Nelson, Led Zeppelin and Prince. I’d like to get some more commissions as it’s great to make them for people who are really going to get a kick out of their favourite artist, knitted in wool and fully posable.

I’m there for the fans who aren’t going to find their favourite band as action figures; something that’s not available on the high street or anywhere else.

WHAT MUSIC DID YOU LISTEN TO GROWING UP?
I grew up living with my mum and my grandparents, that might be why I feel like I was born out of my time.

The radio was always on and there are a couple of songs that seemed to be playing a lot while I was growing up, like Big Yellow Taxi by Joni Mitchell, and House of the Rising Sun by The Animals.

My mum also listened to a lot of Motown and soul, that was her thing, she was a Mod before I was! Then I remember her having the Sound of Bread album that everyone had in the seventies. I loved that… still do. 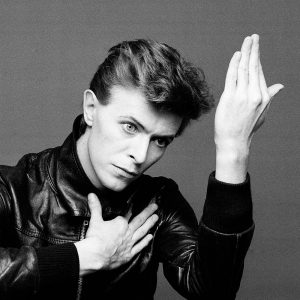 When I was about fifteen I got massively into Bowie and Roxy Music. I had a good friend who was into Pink Floyd and loved Syd Baretts early songs, but then as a student I was mainly into indie stuff like My Bloody Valentine and Primal Scream. I studied in Leicester where there were a lot of Indie/Sixties crossover nights. 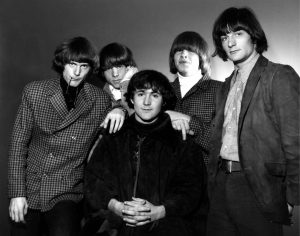 I crossed over, gradually picking up Monkees and Beach Boys records from the market for fun. The first sixties band I took seriously were the Byrds. They had three fabulous songwriters with Gene Clark, Roger McGuinn and David Crosby… So from there I got into lots of other singer songwriters as well as obscure freakbeat and psych like July, Kaleidoscope, The Poets and Wimple Winch. I had Rubble albums and the British Psychedelic Trip Compilations of rarities.

WHO ARE YOUR FAVOURITE ARTISTS?
I still love a lot of psychedelia, bands like The Nazz and The West Coast Pop Experimental Band.. the really freaky stuff but also singer songwriters because you get a sense of what someone is really about and their sensibility as a songwriter.

I had Dylan’s sixties albums for ages, but it was when I really got into Blood on the Tracks that I became a huge fan. This coincided with me learning to play guitar.

I would listen to that album on headphones and try to learn the chords and the words. Then I’d practice them… everyday!

I love a lot of country rock too: Gram Parsons and the Flying Burrito Brothers, The Eagles and Poco.

WHAT ARE YOUR FAVOURITE ALBUMS?
Oh there’s so many…. The obvious critically acclaimed sixties classics like Pet Sounds, Revolver and Forever Changes are favourites of mine.

‘Blood on the Tracks’ is definitely an important one for me. Genes Clark’s solo albums. Townes Van Zandt… all of his! They’re just consistently great as the seventies go because he was doing his own folky cowboy thing.

The last thing I heard that blew me away was the lost psychedelic folk album, Parallelograms, by Linda Perhacs, it takes you places…

WHAT’S THE BEST GIG OR FSTIVAL YOU’VE BEEN TO?
I’ve been to some great gigs this year. I’ve seen Neil Young, Jeff Lynne, but probably the most amazing experience was seeing Fleetwood Mac and meeting Mick Fleetwood.

I did a commission for Mick. He asked me to make four sets of Fleetwood Mac dolls as he wanted to give then as gifts to the other band members. So my Woolly Fleetwood Macs are with Jon, Christine, Lindsay & Stevie. 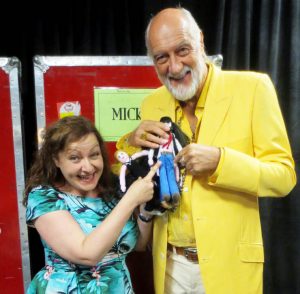 I was able to deliver them personally to him in his dressing room and he loved them. I took pictures of him with the dolls, he really seemed taken with them. He was so lovely and it was great to meet him.

WHAT ARE YOU CURRENTLY LISTENING TO?
Mainly singer songwriters of the country & folky variety with fingerpicky guitar. I can’t get enough of Townes Van Zandt right now.

I met an incredible singer songwriter called Jay Fynn. We met at a Bob Dylan Basement Tapes Classic Albums event. I know Sid Griffin who was there speaking and he knew about my Dylan dolls. I had a knitted Bob with me and Sid waved it around to everyone in the audience, so afterwards a few people asked me about them.

Jay Fynn subsequently asked me to make a Tom Waits. In the process I heard Jay’s songs, which are some of the most beautiful songs I’ve ever come across.

He’s amazingly talented and has self-released an EP called Tumbleweedin’ which I made available through my Woolly Rockers shop online.

From Mr Fynn I learned a few fingerpicking tricks on the guitar and picked up on some more lovely folk songwriters that influenced him, like John Martyn, Jackson C Frank and Bert Jancsh. 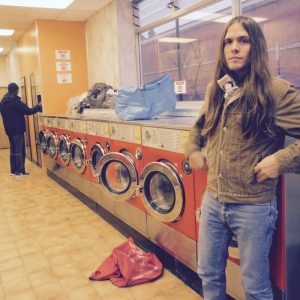 I know I’ll continue to be inspired by music and make more Rockers. It’s great to be able to have an idea for someone, research pictures and bring them to life… With wool!