“Musically speaking, Sweet always kept the fans guessing. There are not so many other bands that have had careers like our own” says Andy Scott, the guitarist who joined up with half the Londoners in mid -1970, and he’s not wrong!

In the four and half decades following that critical meeting the path of The Sweet has indeed followed a plethora of twists and turns. Beginning life as a wholesome MOR pop act they soon cranked up the volume and courted infamy becoming staples of the top ten during the glam-rock revolution before finally undergoing reinvention as the inherently tuneful hard rocking behemoth that we know today.

Hated by critics but worshipped by a legion of fans the quartet were reviled as nothing more than puppets of their song writing and production team before severing those ties and proving more than capable of going it alone. Life with Sweet could never ever be described as dull.

In 2015 Sweets’ name is more legendary than ever with a string of stars ready to pay respect to the band:

The band’s material has now been covered by artists as diverse as Poison, The Damned, Joan Jett & The Blackhearts, The Red Hot Chili Peppers, Pat Benetar, Cockney Rejects, Saxon, Nuclear Assault, Krokus … the list goes on.

Including brand new tracks alongside classic favourites ‘Action! The Ultimate Story’ offers the most detailed breakdown so far of the group’s historic career to date: get it now from Amazon

Turn it up and enjoy the music! 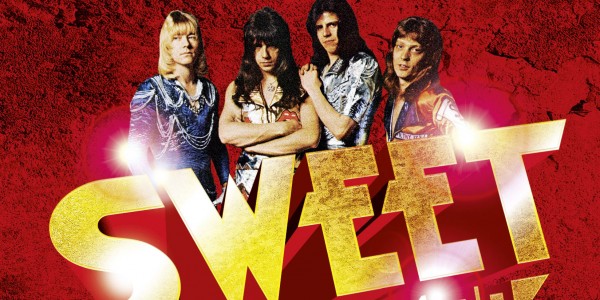