Think You Know Your Sinatra?

Think you know your Sinatra? Here are some interesting facts about Ol’ Blue Eyes…

In the 1940s, Frank Sinatra was known for his distinctive bowties, which were handmade by his wife, Nancy Sinatra Sr. The pattern she used to make them still exists, and is in the Sinatra family’s archive. 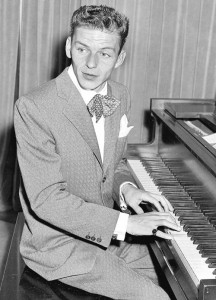 2. “Put Your Dreams Away”
In 1942, Frank Sinatra commissioned Canadian songwriter Ruth Lowe (who wrote “I’ll Never Smile Again”) to compose a closing theme for his weekly radio program. Lowe, along with Paul Mann and Stephan Weiss, penned the perfect song: “Put Your Dreams Away.”

Sinatra loved the tune so much that he recorded it three times (at Columbia, Capitol and Reprise), and used it as his closer on radio and television for the next thirty-plus years. Fittingly, it was the final song played at his funeral service on May 20, 1998.

3. Lowest Note
The lowest note sung by Frank Sinatra was a low ‘F’. The finest example of this feat can be heard on his 1963 recording of Jerome Kern and Oscar Hammerstein II’s “Ol’ Man River” (from the Reprise LP The Concert Sinatra).

4. “Goodnight, Moonbeam.”
Although his work as a band singer and radio artist frequently kept Frank Sinatra away from home during the early 1940s, he knew his little girl – Nancy Sinatra Jr. – was at home in Hasbrouck Heights, New Jersey listening to the broadcasts. During the program’s closing he would often give her a virtual hug by saying, “Goodnight, Moonbeam.” 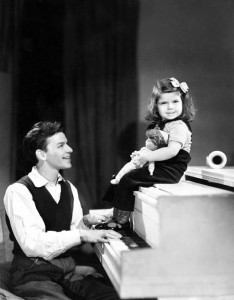 5. “Tenderly”
Frank Sinatra’s very first solo radio program (Reflections – CBS, 1943) was conducted by songwriter Walter Gross, who became famous for writing the song “Tenderly.” It was the only time that Sinatra and Gross collaborated (examples of both Reflections and Sinatra’s sole performance of “Tenderly” may be heard on the box set ‘A Voice on Air’).

You can find out more about the the box set collection here.

Check out these facts!

The latest Sinatra collection is out now…